So it became blatantly obvious on Friday, that even after a retest, my students were still unable to classify animals as carnivores, herbivores, and omnivores.  I was pleased that some could tell me what those words meant, but almost none could generate examples of these animals.  I of course wondered how I could support my science teacher while integrating technology.  My solution? Pic Collage.

I blogged earlier this year about Pic Collage being a great photo collage tool that was made even better with the ability to search the web for safe images straight from the app.  As my students have already used this app, I planned a quick one period review lesson on the classification of consumers and let the kids go to work.  Each student chose a random card with carnivore, herbivore, or omnivore on it.  From there they were given the requirements of the project and set loose.  Each student had to identify at least five examples of an animal that fit into the category they chose.  They had to add text to the collage to label the animal classification as well as their name.  Besides that, students were free to choose whatever layout, images, text, and color scheme they wanted.  I can happily report that 100% of my students completed the task in our 50 minute block of time and most actually made pic collages for each of the animal classifications.  Each student independently uploaded their file to Dropbox and got a chance to check out the other projects as well.  With only a few exceptions, they also showed 100% mastery of generating animals to fit a given consumer classification. 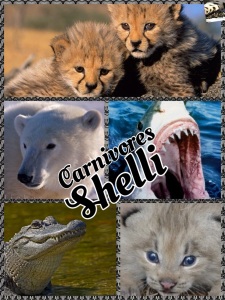 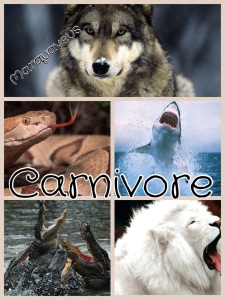 In the midst of this lesson, I had another Pic Collage idea.  Students could create Pic Collages of nouns and verbs.  This would be a fun iLesson to cement the parts of speech.